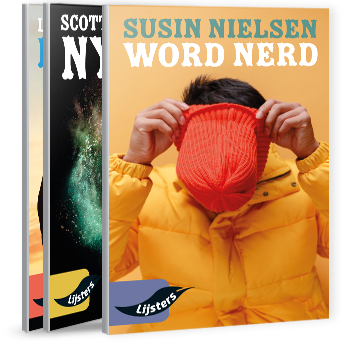 Ambrose Bukowski is a twelve-year-old with a talent for mismatching his clothes, for saying the wrong thing at the worst possible time, and for words. Making friends is especially hard because he and his overprotective mother, Irene, have had to move so often. And when bullies at his latest school almost kill him by deliberately slipping a peanut into his sandwich to set off his allergy, it's his mother who has the extreme reaction. From now on, Ambrose has to be home-schooled.Then Ambrose strikes up an unlikely friendship with the landlord's son, Cosmo, an ex-con who's been in prison…

Emmett Atwater isn’t just leaving Detroit; he’s leaving Earth. Why Babel recruited him is a mystery, but the number of zeroes on their contract has him boarding their lightship and hoping to return to Earth with enough money to take care of his family, forever. As he and nine other teenagers wormhole their way through space, Emmett discovers the promised millions aren’t a guarantee. Each recruit must earn the right to travel down to Eden. There, Babel will use them to mine a substance that’s quietly become the most valuable in the world. Emmett’s year-long flight will act as a competition. But Babel’s ship is full of secrets. As Emmett uncovers the truth, he realizes he’s not fighting for wealth or glory, he’s fighting for his life.

When a family tragedy means Mick is sent to the outback to live with his Grandpa, it looks as if he has a lonely life ahead of him. The cattle station is a tough place for a child, where nature is brutal and the men must work hard in the heat and dust. However, after a cyclone hits, things change for Mick. Exploring the floodwaters, he finds a lost puppy covered in mud and half-drowned. Mick and his dog immediately become inseparable as they take on the adventures offered by their unusual home, and the business of growing up, together.